Homeschooling with a MISSION

So here we are in a local play area as a special reward for completing several responsibilities, munching on our lunch and anticipating the playtime to come, when in squeals a little one followed by his family. Of course, the little boy’s straight path to the slide was followed by older sister’s  yells and mother’s quite colorful language insisting upon his eating first before play. The whole exhibition to follow was mesmerizing to Mommy and AbiNoelle. The little one scampered up the slide while sister chased after, mother loudly and vividly demanded his return, and father sat down to enjoy his lunch. The language over the next few moments was certainly authoritative, yet quite ineffective.

The leading Early Childhood manual for those pursuing national credentials stresses usage of the latest and greatest in educational discoveries, including emergent style learning and a student-led approach in the preschool classroom. At one point, teachers are instructed to maintain only “responsive” language and to avoid “restrictive” language. The author interprets all negative language as restrictive and asserts that such “disrepectful” directives toward children be transformed into completely positive, “responsive” statements. For instance: A teacher should not say, “No yelling,” but rephrase that as “Speak softly, please.” No doubt we all agree that love and kindness should be in all conversation, yet this manual goes to the typical leftist extreme and explains that it would be too “restrictive” for children to hear “no, don’t, stop, or not that way!” This language “makes the classroom a stressful environment for everyone.”

How mixed up has this world become? The Bible, itself, illustrates many times that God has given very clear instructions in a negative format. Think of the Ten Commandments! “Thou shalt not steal,” not “It would be better to leave other people’s things where they belong.” No doubt, the little one on the playground and his mother with her very colorful commands illustrated perfectly the response the manual was endeavoring to eliminate in the preschool classroom. Unfortunately, today, the extreme tends to brand entire philosophies as radical and unacceptable. We are so thankful that our school curriculum through the A Beka Academy is formulated around Biblical truth, not the latest psychologist’s discoveries. Just in this first 6 weeks of school, AbiNoelle has heard many times “No, don’t, stop, or not that way!” Why just the other day, she learned a valuable lesson of following Mrs. Reese’s directions when her project did not come out right. “No” can keep us safe and happy and help us accomplish things for God’s glory.

And accomplish much, she has….

Art time (when directions were followed) yielded a wonderful Fall painting, all five vowels were mastered, and cursive writing – WOW! – we couldn’t ask for better! 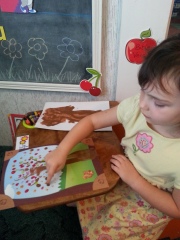 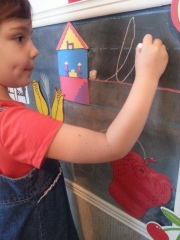 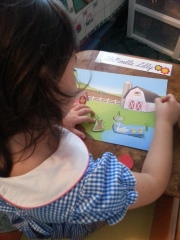 Ridin’ with ranchers and roundin’ up those cows on Mrs. Reese farm made phonics and numbers time soooo fun!

Mrs. Reese even had a volcano erupt in her classroom – WOW!

AbiNoelle even got to “jump in the haystack” on the farm when she answered correctly.

Our trip to the library proved that some of our character lessons were on the mind. AbiNoelle called Mommy away from the books and to the magnetic board to see what word she had spelled. What was it? – obedience!

And finally, the North Carolina Apple Festival fit in perfectly with our Community Helpers lessons. AbiNoelle had great fun meeting the the first responders, dressing up and playing like them, and meeting Congressman Mark Meadows. (We had visited his Washington D.C. office and met with his staff, but this face-to-face meeting was special for us…and he even posted his picture of shaking hands with AbiNoelle on his media page.) 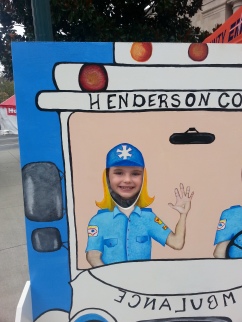 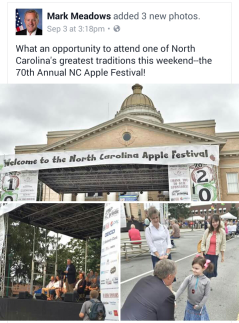 Staff Missionaries for The Voice in the Wilderness. www.thevoiceinthewilderness.org. Homeschoolers. We are a family of four(read Our Story). We love the Lord, the King James Bible, and Standing for what is right!